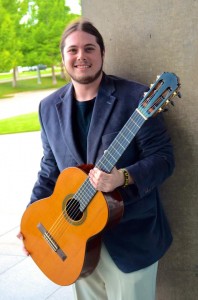 Born and raised in Texas, Marc Rosenberg has always been involved in music. His interest in music began with his participation in many school choirs and the prestigious Houston Boys Choir. Having always loved the sound of the guitar, at the age of 14, Rosenberg decided to studiously pursue the instrument and began lessons with Adam Flint. In the beginning, Rosenberg studied many different genres of guitar playing, but he eventually put his focus on establishing a strong foundation in classical guitar technique. Rosenberg earned a scholarship to continue his classical guitar studies at the collegiate level with Chip Christ at Texas Christian University in Fort Worth, Texas. After receiving his Bachelor of Music in Guitar Performance, he earned another performance scholarship to attend Carnegie Mellon University in Pittsburgh, Pennsylvania, where he received his Master of Music in Guitar Performance under the tutelage of Professor Jim Ferla.

Rosenberg has played in concerts throughout the USA as both a soloist and as apart of chamber groups, including a performance with a singer at an event honoring the world renowned soprano Renée Fleming. He has also participated in many competitions and masterclasses with such notable names as Pepe Romero, Roland Dyens, Dale Kavanagh, Bill Kanengiser, and Lily Afshar, to name a few.